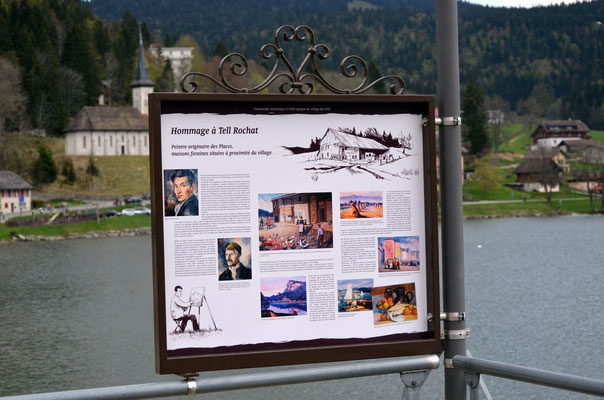 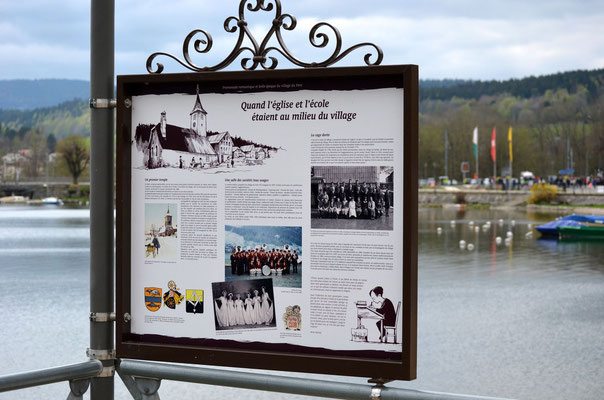 Both literally and figuratively, a step-by-step journey!

With the installation of half a dozen panels along the harbor, the Société de Développement du Pont (SDP) (The Developpement Society of Le Pont) now offers tourists a plunge into the “Belle Époque” of the village Le Pont. The walk should extend in a second time around the village. A nice way to discover the past while strolling.

The idea of rehabilitating the footpaths has been floating around the village Le Pont side for several years now. A noble intention that has long remained a dead letter...

In November 2013, the project resurfaced, the historian Rémy Rochat having approached the village of Le Pont and the Development Company, a draft of a didactic course labeled "Belle Epoque" under the elbow.

Taking the paths laid out for the guests of the grand hotel, the proposed itinerary revolves around fifteen panels retracing village life at the beginning of the 20th century. Leaving from the station, the walk follows the harbor, passes by the church and the Grand Hotel to end at the Manoir des Hautes Roches.

The idea is attractive and just begs to be realized. A steering committee set to work and it was in February 2014 that the planning of the project was officially launched.

Finalization of the route, budgeting of the whole and development of a presentation and financing file having been carried out with great speed, the first two panels are put up in the fall in front of the Great Hall. Passing people like the Combiers (the inhabitants of the Vallée de Joux) can discover the importance of the church then located in the middle of the village, as well as a tribute to the famous painter Tell Rochat.

At the start of summer 2015, the SDP is shifting into high gear and no less than four additional visuals are installed on the platforms. On the bill, the Place de la Truite, the dairy industry which was significant in its time, the architecture marked by some upheavals and an overhead projector on Lac de Joux.

Ample enough to satisfy the various actors and partners of the initiative. First, Rémy Rochat who did a lot of research and wrote the texts. The graphics are left to the care of Pierre-Abraham Rochat while the production of the supports, in metal or wood depending on the location, has been entrusted to craftsmen of the Vallée de Joux.

Estimated at nearly 60,000 francs, the entire project is financed both by the public authorities (Municipality of L'Abbaye, SDP, inhabitants and part of the municipality of Le Pont) and by various private or institutional sponsors (Paul-Edouard Foundation Piguet and Loterie romande, among others).

The walkway Belle Epoque is enriched by three additional panels, the first of which is located at Le Pont station, the start of the walk. Walkers can discover the map and details of the route as well as communications to the Vallée de Joux.

Located respectively at point 13 and 14 of the said route, the other two panels refer to the journey of Johann Wolfgang von Goethe, the famous German poet who discovered the region in 1779 as well as to the alpine pastures path winding through the Sagne-Vuagnard valley to the top of the Dent de Vaulion.

The 30th June 2018 finally sees the official inauguration of the walkway Belle Epoque.