A lively Saturday at Le Pont

Many events took place on Saturday June 30 at Le Pont: "La Fête de la Rade", the inauguration of the walkway Belle Epoque and the passage of the race around the lake

The walkway Belle Epoque was inaugurated at Le Pont 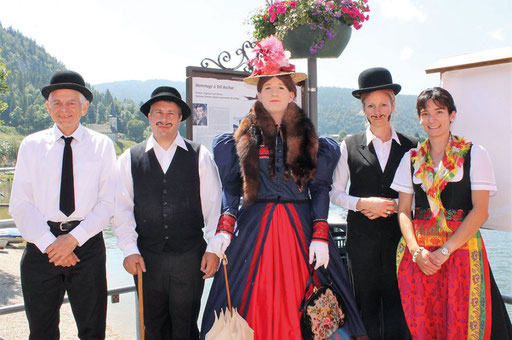 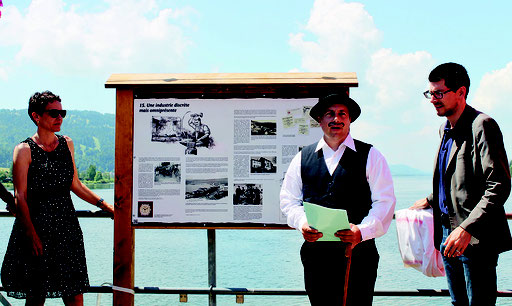 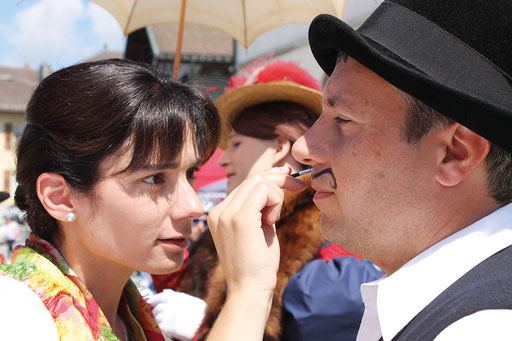 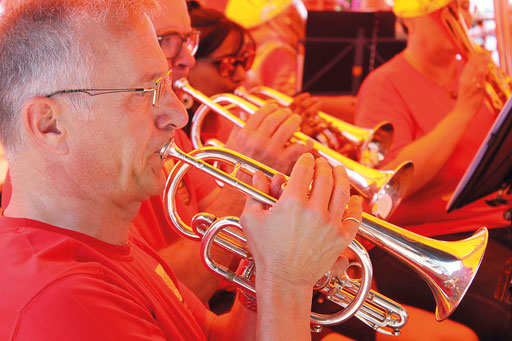 It was on the occasion of the annual "la Rade se déride" festival that the Société de Développement du Pont (SDP) inaugurated its walkway Belle Epoque. Under generous sunshine, dozens of local residents came to enjoy the activities and discover one of the first ten out of 15 signs posted along the harbor

It was hot, the weather was fine this Saturday, June 30, 2018 and Le Pont harbor was celebrating. The Brass Band l'Echo des Forêts took care of the musical entertainment and the children enjoyed the many games available to them, on the road closed to traffic. The harbor was celebrating and the atmosphere warm and friendly. The theme of the day "Belle Epoque" had inspired some: some came dressed accordingly, ignoring the heat!

For several years, the Société de Développement du Pont has had the idea behind its head to rehabilitate the pedestrian paths. In November 2013, the historian Rémy Rochat having approached the village of Pont and the Development Company, a draft educational course labeled "Belle Epoque" under the elbow. Taking the paths designed for guests of the grand hotel, the proposed route is structured around fifteen panels retracing village life at the start of the 20th century. Starting from the station, the walk follows the harbor, passes the church and the Grand Hotel and ends at the Manoir des Hautes Roches.

Counting on the presence of the syndic Christophe Bifrare and the two deputies Carole Dubois and Nicolas Rochat Fernandez as well as the entire Belle Epoque course committee, it is the president of the SDP, Hugues Vuilleumier, who gave a speech and tried painfully to sprinkle champagne on the newly inaugurated panel. Congratulations to historian Rémy Rochat who did a lot of research and wrote the texts. The graphics were left to the care of Pierre-Abraham Rochat while the production of the supports, in metal or wood depending on the location, was entrusted to craftsmen of the Vallée de Joux.

This is one more attraction for our village Le Pont!

The walkway Belle Epoque of the village Le Pont

The hard reconversion of two flagships of Le Pont

Overlooking the Lac de Joux, the Grand Hotel and the Hauteroche manor are heritage gems, but difficult to rehabilitate

"What appealed to me was the idea of "having a castle once in my life." For Daniel Lehmann, owner of the Hôtel de la Truite au Pont, acquiring the Hauteroche manor was a dream, fulfilled five years ago. Like the Grand Hôtel du Pont, this 26-room villa reminds visitors of the boom years of this village of 450 souls. In the twentieth century, the bay of Pont was frequented by English, Russian and French tourists from high society, staying at the Grand Hotel. The establishment made the reputation of the place, sometimes nicknamed the "Montreux du Jura" or the "little Davos".

The French press magnate Maurice Bunau-Varilla had even decided to settle in the village, on the foothills of Dent-de-Vaulion. In 1912, he built the Hauteroche manor there, one of the first buildings in the country made of reinforced concrete. The wealthy owner of the French newspaper Le Matin had commissioned the French engineer François Hennebique to create this imposing residence, which is now part of the landscape of the Vallée de Joux. When its owner died in 1944, the mansion returned to the French state. Then it was transformed into a leisure center, into a reception area for asylum seekers before being bought by the Family Hostels in 1985. An association was created to safeguard this vestige in 2000. The building is today desperately empty, like its glorious neighbor, the Grand Hotel.

Everyone has their own idea

But rehabilitating these buildings - which can appear oversized in this region - is proving complicated. "They are not too big," says L’Abbaye trustee Gabriel Gay. You just need to find them a good retraining, which is no small task."

In the Valley, everyone has their own idea. "We would prefer to see them busy, that's for sure," explains Cédric Paillard, director of the Tourist Office. In particular the Grand Hotel. Here, we have very little information about his future, although everyone is attached to it."

The Building, Heritage and Logistics Service (SIPAL) must be consulted for this work, which takes time. Notably because the note in the architectural census of the manor makes it a monument of national importance, that of the hotel of regional importance. "Nothing could be achieved in the mansion due to unimaginable administrative complications of the Canton services", comments Daniel Lehmann, who does not wish to say more about his project. "In this case, we must start by legalizing the land of Hauteroche and its surroundings," explains the trustee. The investigation of the building also involved modifications to the renovation project to satisfy the state services, a little complicated, I admit."

Outside the building zone

No excavator on the horizon, and the situation is likely to continue. “These two buildings are located outside the building zone,” emphasizes Ulrich Doepper, architect at SIPAL. The mansion could become a summer house, the Grand Hôtel des logement, ensuring that its characteristics are not altered." The hotel has already been redeveloped for the first time as a clinic for Dr Bircher. Then it was bought in 2012 by Isidor Elsig, of the Valais real estate agency Galantica, who fell in love with this work. He wants to set up around 30 apartments there, with perhaps a luxury watch repair shop.

So far, no approach has been made to the Municipality for this establishment. "It could become a burden because it is not possible today to build residential apartments there," said Gabriel Gay. As for the manor, the land should be in a building zone. "But the Municipality has too many areas to build on and an equivalent part will have to be dezoned, according to the law on spatial planning and the Cantonal Master Plan. However, all building land is the property of individuals, ”adds one who sees it as a private school, for example a hotel.

In the meantime, empty and unheated, the buildings are deteriorating. "The frost partially damaged the hotel," warns Ulrich Doepper. A building must be inhabited to last.”

To better understand the history of the village of Le Pont, follow the lady with the parasol. Its elegant silhouette stands out from the arrows which will indicate from this summer the direction to follow to discover the Belle Epoque walk set up by the local development company. For the moment, only two panels installed on an esplanade, richly illustrated, give an example of what awaits onlookers along this course of half a dozen kilometers. He will take them from the station to the foot of Dent-de-Vaulion, passing through the lime tree planted in front of the La Truite restaurant and the old cinema.

At each stop, the reader will learn a little more about this village at the beginning of the 20th century, from its cheese-making past to the works of the painter Tell Rochat, including its architecture. "The Bridge has developed on two completely different levels," comments historian Rémy Rochat. There is the pediment, facing Lac de Joux, which has changed over time, and the small alleys behind, which have long remained more agricultural."

The first two panels in the series of fifteen were therefore installed last fall. One of them recalls that the current game library occupies the old Pont cinema, the meeting point of the Fip Fop Club. It was built on the site of the old church. The whole is richly illustrated by Pierre-Abraham Rochat and archives. "Many images come from private funds, spared by the numerous fires, somewhat by a miracle", underlines Rémy Rochat.

At the end of 2013, the historian submitted his Belle Epoque walk project to the Société de développement du Pont (SDP). She immediately agrees to help him. "Some had the same idea without having succeeded in making it happen," says Christophe Bonny, president of the SDP. Begins the collection of nearly 55,000 francs, necessary for its realization. The village, the Municipality, the Paul-Edouard Piguet Foundation and the Loterie Romande, among others, agree to put their hands in their pockets.

For now, information is only given in French. They will then be translated into German, English and Italian, and readable thanks to a QR code affixed to the panels. "This information is not intended only for tourists," says Rémy Rochat. The population is also concerned and can learn a lot about its past.” In the 20th century, Le Pont was known far and wide. The second part of this romantic stroll, not yet signposted, will take the walker to the Grand Hotel, to the Manoir des Hautes Roches, to the foot of the path leading to Dent-de-Vaulion, in the footsteps of this glorious past.

“High society English, Russians and Italians came to relax at the Grand Hotel. 1905 was the year of all records, says Rémy Rochat. It was the great period in the development of winter sports." The establishment then had its own ice rink, tennis courts and even a golf course. “The First World War was an absolute break,” concludes the historian. The Alps have managed to get back in the saddle thanks to the ski lifts, the Jura, no.”

However, it will take another two years to be able to use the hiking trails created at the time for guests of the prestigious hotel again. “If all goes well, the entire route will be marked in 2017,” concludes Christophe Bonny.